If you are not familiar with the previous setup. The design revolved around an array of TV tuners connected to a 7-port USB 3.0 hub. In turn, this connected to a USB 3.0 controller which was passed through Discrete Device Assignment (DDA) through to a Windows 10 Virtual Machine. This run DVBLogic TV Mosaic, the IP TV streaming software.

The solution has run extremely well. There have been no crashes from TV Mosaic, the VM or the Hypervisor. Until last week.

The system missed last Saturdays recording schedules and on Sunday afternoon, wouldn’t initiate playback. On inspection of the VM, one of the Tuners was showing as “unknown” on the TV Mosaic console. The others were all fine. Once this phantom tuner was removed from the console, everything started working again.

Initially thinking that it was related to a coincidental BIOS update on the server, it turned out that the tuner was simply dead. I RMA’d it with DVBLogic – who didn’t challenge my diagnostic or offer any resistance – but I did have to ship it Internationally at my own expense.

A week later, I came to use the system again and, once more, it was dead. A trip to the attic later and the was dead. A multimeter confirmed that the power supply had died, and I begun an RMA process with StarTech this morning.

If the power supply on the StarTech was defective, it could potentially have caused the fault with the TV Butler tuner. Although this is speculative and unprovable. My main suspicion is that the problems were caused by heat. The attic roof space is uninsulated, and the UK is in the summer period. With temperature in the attic space certainly to have ranged into the 40c’s.

Unlike with the physical TV server that this setup replaced – which had fans. This setup doesn’t. PCIe TV Tuners are intrinsically designed to withstand higher thermal variances than USB ones. The StarTech and TV Butler products are quite simply basic consumer devices. It is possible that this factor led to both of their demises.

There was a power outage mid-week last week, and the StarTech itself was not sitting on the server UPS – but it was on a surge protector. It is my belief that this did not contribute to the issue.

The brief for the redesign is simple

To accommodate #1, #2 and #3 the USB Hub is going to be eliminated from the design. The TV Tuners will now connect directly to the DDA USB controller. In order to do this, the dual port controller will need to be replaced.

After deliberating on whether to get an externally powered or bus powered 4-port controller, I chose a , bus powered card. A risk, given my previous experience here. The DG-PCIE-04B reviewed better than a similarly priced externally powered one. The decider was that it uses a NEC chipset and not a RealTek/SiS (i.e. cheap) chip. Finally, the fact that each of the ports had its own voltage management and fuse circuit is a valuable quality safeguard.

To satisfy design brief #4, the USB TV Tuners will need to be mounted away from the server. To achieve this, I am going to mount the Tuners in the patch panel.

Using a set of keystone jacks. A USB lead will run between the USB controller and the Patch panel; simply mounting to the TV Tuners held in the patch panel.

The patch panel happens to be near the ceiling, directly above the TV aerial distributor for the house. Using 4m coaxial cable, the aerial feed can route through the existing ceiling cable run and clip neatly into the TV Tuners.

The Amazon order consisted of

The installation was extremely simple. 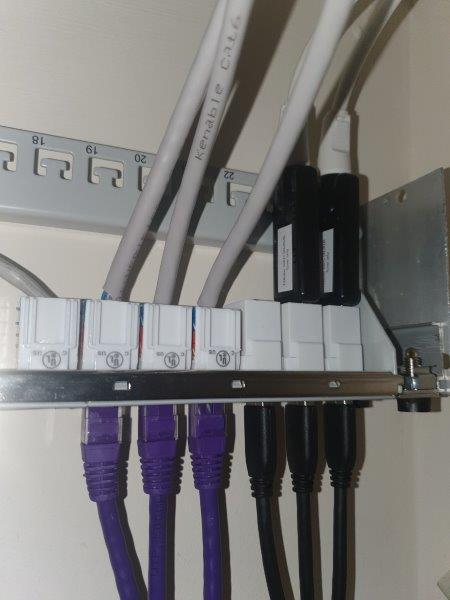 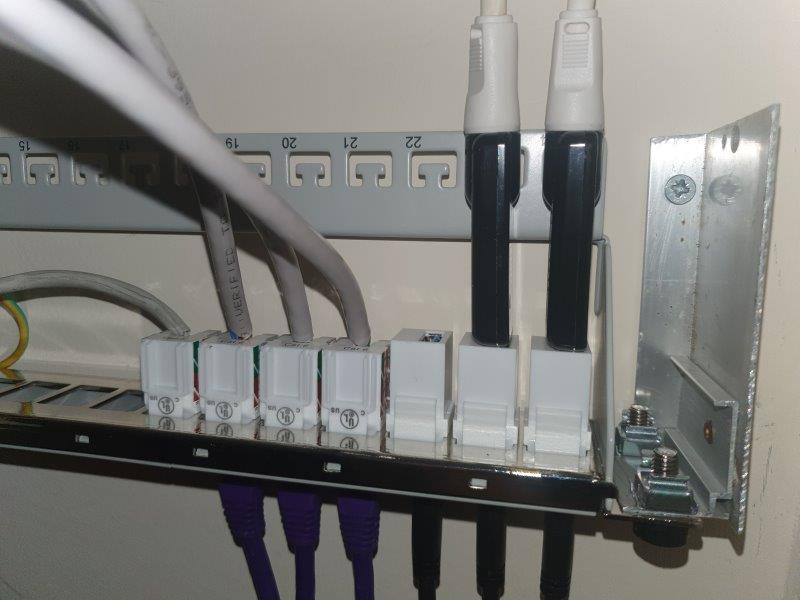 The Virtualised Windows 10 Streaming TV Server came back online and there hasn’t been any instability caused by the bus-powered USB controller. The TV Butler’s are warm to the touch, have plenty of air-flow and the ambient temperature can be monitored via existing sensors in the room. 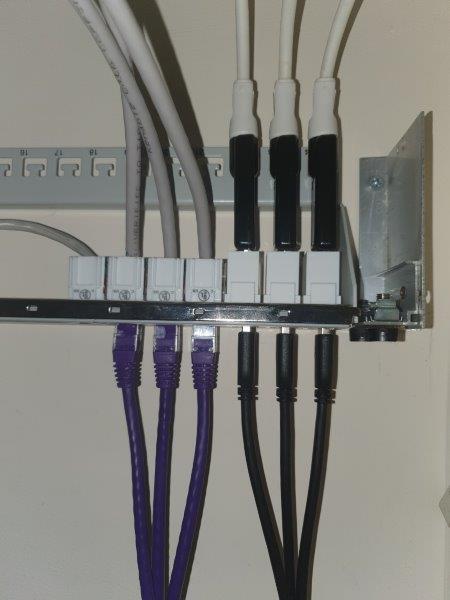 With any luck, I will not need to revisit this project for quite some time!